Come and get it!

Subscribe to get all the juicy details in your inbox!

Who knew that picking a word to define the upcoming year would be so difficult. But when you’re picking one word, just one, it becomes almost obsessive. I’ve spent hours with my notebook doodling different words looking for the one that fits what I want to help guide me over the next 365 days.

What is this magical, mysterious declaration I’m making for 2014?

Sounds narcissistic, right? I’m a classic people pleaser and this year, I’m striving for a better version of me. I’m not aiming for perfection. What I want is to be the best me I can possibly be. To work harder than I’ve ever worked. Achieve goals I never imagined possible.

I can’t do any of that without knowing who I am and where I want to go. So, for 2014, this classic people pleaser is taking the bull by the horns and riding it bucking and snorting all the way across the finish line.

I’m a little Type-A. That’s an understatement. I’m a lot Type-A. Today, I missed a deadline for a project I was working on. Folks, I dropped the ball. 100%.

Type A individuals tend to be very competitive and self-critical.

Yep, I’m going all honest and bare faced right now. I feel like crap. Total crap. I let people down professionally, but more importantly, I let myself down.I pride myself on my professionalism. I’m the first one on the phone, waiting for the conference call to start, no matter how bad the muzak is. If you want to know how bad it is, I’m Hermione Granger. Always raising my hand, researching, and consuming every bit of information I can to make myself better.

Feel the breeze that just blew over you? That’s me sighing.

What I really want to do is weep, because my Type-A takes me there. I’ve apologized and owned up to dropping the ball, but it doesn’t make me feel better.

Why is it harder to face our mistakes than to accept them?

It’s because we have to admit fault in ourselves. I don’t know about you, but I hate seeing my flaws. It’s an inherent part of human nature. We’re flawed. No matter how much we strive for excellence, if we’re running to0 fast, we’re going to trip and fall. I’ve spent the past few weeks running too fast, not being as organized as I should and I fell flat on my face.

So, what am I doing about all of this? I’m up the road from my house at the tiny local coffeeshop. There is no one to disturb me. I have my calendar, my notebook, and my email. I am making sure I have everything on my calendar and don’t lose sight of what I’m doing. I’m not going to be the person you can’t depend on. There are times I won’t be able to do things perfectly, but I’ll get them done. That’s all that matters.

Social media is an amazing tool and way of communication. It’s opened a whole new world for millions of people, but it’s not without fault.

I’m thinking a lot about those flaws right now.

It’s 1998 and I’m in a chat room after a day on the golf course. Normally, I’d have been out since it was a Friday night, but I had sprained my ankle earlier in the day. (Never play golf in Keds.) In that chat room was a nice young man. He was flirty, made fun of me for spraining my ankle on the golf course and after chatting for a few hours — with the other hundred or so people in the room — asked if he could email me.

That email turned into hundreds of emails, which turned into phone calls, and finally, a face-to-face meeting. Of course, when we met, everyone was terrified, because according to them, the Internet was filled with rapists and murderers. We’ve been together 15 years, married nearly 14 and have a 12 year old son.

Fast forward to 2013 and the state of the world I work in feels as if it’s going to hell in a hand basket. The Wall Street Journal has decided I’m some sort of party animal. I hate to break it to you WSJ, I was at Type-A  Advanced in Philadelphia two weeks ago and was in bed at 10pm, working, with a bottle of water and Udi’s Gluten-free Snickerdoodle cookies.

That’s right folks, I know how to rage.

Sure, I’m a mom, but that is not my entire identity. I feel like publications/journalists are out to slay the “mommy blogger”and seem to forget I am more than “Mom.” Before I was a mother, I was Lisa. And while I love my son, I also take time to make sure I nurture Lisa. My son is part of me. Giving birth to him was the most amazing thing I’ve ever done, or will ever do, in my life. But being his mother does not define me as a whole. If it did, I’d crack. For me to be a happy mother, I have to remember who Lisa is and do little things for her as well.

I’m a writer. I also do true social media strategy — meaning I take a set of problems and come up with a solution that makes everyone happy and gets measurable results. I do community management — and I’m good at it. (Believe me, there is a lot more to it than Facebooking and Tweeting.) I’m also working on two books (not including the folders full of notes for future projects.)

I don’t have time to go and party like it’s the dot com era and money is flowing like Cristal in the VIP room of NYC clubs. I mainly write for a living. Show me a normal everyday working writer with Cristal money and I’ll show you a writer who is truly blessed financially; or has a magic chicken laying golden eggs in their closet.

But lately, the world of social media has been slowly eroding. At times, I feel it’s an avalanche trying to bury us all. Social media is no longer about conversation. It feels like it’s about shoving your opinion down someone’s throat and that’s the be-all-end-all. I don’t even have to go into what I have seen, but opinions are just that: opinions—and they’re written all the time. They have been around since the existence of time. Except people used to believe in having a verbal discourse known as a conversation and would respect another person’s opinion.

What happened to the art of conversation? When did we forget to sit back, take a deep breath, collect our thoughts and then proceed? Instead of moving ahead with all of this grand technology, it feels like we’re moving backwards. It’s like we’re becoming digitized cave people: truncating our thoughts into 140 characters or less, sharing (or is it promoting?) our selfie photos like cave paintings on a wall, or Vining our little clips where we discovered fire or invented the wheel.

I’m not perfect. Sure I’ve been known to spout off at the mouth without thinking. I’m human. However, the older I get, the more I think about what I say and the ramifications. Call me an old fogey, but I worry the last thing I say to someone could be something that hurt them deeply and I don’t want that on my conscious. It’s not saying I don’t have an opinion, but it’s that I take my time and process.

Does that affect me as a writer? Not really, as the only opinion pieces I write are here and rarely anything that would cause heat. That’s because the voice in my head are the my Grandmother, Mother and Aunt, all telling me “If you don’t have anything to say about anyone, it’s best not to say it at all.” The phrase “never discuss in public what you wouldn’t discuss in polite company” also rings a bell.

I’m just still trying to figure out where social is heading. I know where I’m headed — to expand my efforts to create a better, kinder world with social media. By moderating my actions, I hope to influence others and remind them of days gone past… when courtesy ruled and we respected others opinions.

Letting go is one of the most difficult things we can do. We hold on to things that cause us pain beyond it’s ability to serve us. Finding forgiveness in order to let go is even more difficult.

Past actions replay in our head in a continuos loop. While we replay these over and over, it causes our stress levels to go up and our mind to fixate, leaving us in a continued state of tension.

“Forgiveness can change your life.

Forgiveness does not mean you erase the past, or forget what has happened. It doesn’t even mean the other person will change his behavior — you cannot control that. All it means is that you are letting go of the anger and pain, and moving on to a better place.”

Finding forgiveness is one of the most difficult things we can do. It takes us going to the mirror and looking deep into our soul, chipping away and unleashing a virtual well-storm of emotions that drain you in ways never imagined. While it seems easier for us to wall off painful emotions, it still leaves them trapped inside our bodies, festering.

That festering holds us hostage, keeping us attentions on things that are more important, like our lives. We’re so tied up worrying about the past, or what will happen in the future, that our present leaves us in misery.

How can you let go?

It’s different for everyone. Some pray, while others are very clinical and just let go. I’ve known people who write all of the ugly in their life on paper, then light it on fire and burn their heartache away.

No matter it is, forgiveness is an essential part of the process. It doesn’t mean you forget. However, the simple act of choosing not to be affected by whatever force holding your brain hostage is liberating.

We have to be responsible for our own healing. Letting go of what’s holding our mind hostage is a stepping stone to allowing more positive items take residence and manifest into something beautiful.

How do you let go?

Have you ever lost your mojo?

My mojo has been gone for some time. Non-existent. Kaput.

I posted about being not being able to finesse a situation, which is my writing. My friend, Harry, from My Creative Team told me use brute force.

So, what you are seeing is brute force. I’m afraid if I don’t write and get started soon, I won’t write again. 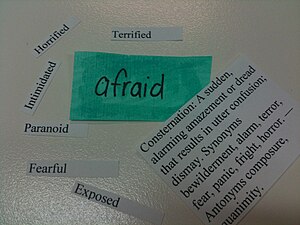 The thought terrifies me.

Like any writer, I get frustrated. Words don’t flow as well, or I write something that is so well done, I shock myself. And then fear sets in.

Isn’t that the fear of every writer? That people will only love us based on the words on  paper. We put so much of ourselves into the words we write. Those words are our thoughts, our passions, our emotion, our creativity.

They are who we are.

What I have to do is put myself in a place of vulnerability.  The willingness to own my shit take responsibility and just go for it. Which I’m doing here.

So far brute force hasn’t been too bad.

I have to remember to stay vulnerable and keep writing. Remembering my breath before I sit down and being aware of it during. Making sure my writing is an exercise of my full being, rather than just intellectual exercise.

Only then, will I approach my writing without judgment.